The 2021-22 school budget vote is Tuesday, May 18. Below are budget fast facts, a look at what else is on the ballot and some information about voting for residents.

The school budget is the biggest investment the community collectively makes with its tax dollars. District leaders work to make the most effective use of resources to benefit students, to develop and manage the budget in a responsible and transparent manner and to be accountable to taxpayers. Each spring the board of education adopts a budget for the coming school year for a community vote, which is held on the third Tuesday in May.

What else is on the ballot?

Three seats on the F-M Board of Education: Candidates include Daniel Seidberg, Sharon Lindars and Marissa Joy Mims. (Candidates’ names are listed in ballot order.)

In order to vote, you must be at least 18 years old, a U.S. citizen and a Fayetteville-Manlius School District resident for at least 30 days prior to the May 18, 2021 vote.

Do I need to register to vote?

No, voter registration is not required.

Can I vote by absentee ballot?

If you plan to pick up your ballot, your application must be received by the district clerk’s office by 4 p.m. May 17.

Absentee ballots must be returned to the district office by 5 p.m. on May 18.

What is the difference between the tax levy and tax rate?

The tax levy is the total amount of money a school district raises in taxes each year from all property owners in the district. Tax rates are calculated by dividing the total amount of the levy by the total taxable assessed value in a community. Tax rates are affected by changes in municipal assessments and state equalization rates, which are determined in the summer. The tax rate is used to calculate each individual property tax bill.

What is the tax levy limit, or tax cap?

The tax levy limit is the highest allowable tax levy (before exemptions) that a school district can propose as part of its annual budget for which a simple majority of voters (50 percent + 1) would be required for authorization. Any proposed tax levy amount above this limit would require budget approval by a supermajority (60 percent or more) of voters. The tax levy limit sets a threshold requiring districts to obtain a higher level of community support for a proposed tax levy above a certain amount.

How would the proposed budget affect my taxes?

The proposed tax levy increase of 1.1% is at the district’s tax levy limit. While final tax rates cannot be determined until the summer, when assessment and equalization rates become available, the district is conservatively estimating the tax rate will remain unchanged.

What is the impact of new debt on the budget?

New debt resulting from recently-completed building projects at F-M High School and Enders Road Elementary School, coupled with the ongoing project at Wellwood Middle School increases the budget by $1,841,944. Since these projects qualify for New York state Building Aid, 88.5% of the cost is offset by additional state aid revenue. Building Aid to F-M is increasing by $1,629,653.

What happens if the budget is defeated?

What is a contingent budget?

State law mandates that under a contingent budget a school district must adopt a budget with no tax levy increase and eliminate all non-contingent expenses, such as certain student supplies, certain equipment purchases and the free community use of school facilities. The administrative budget would also be subject to certain restrictions. If F-M adopts a contingent budget for 2021-22, it would reduce the budget by $731,714. 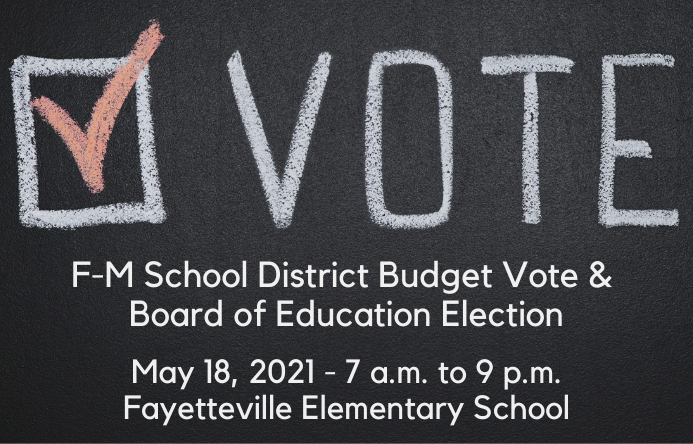