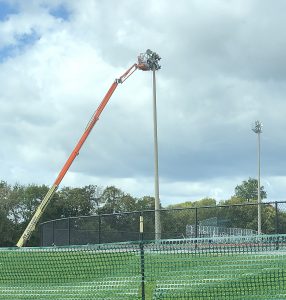 No fear of heights was necessary for the job at hand at the Fayetteville-Manlius athletic stadium last week.

Workers from National E Solutions switched out the stadium light fixtures—affixed to towers about 70 feet high—as part of the $45.2 million capital project voters approved in 2017. The new 750-watt fixtures are more energy efficient, and will actually be brighter, than the 48 1,500-watt high-intensity discharge lights that had been in place.

The new fixtures will more evenly light the field and have less spillage and glow into the surrounding area than the previous lighting system, said Ray Delfing, business development manager for National E Solutions. The new system will also allow the athletics department to create different effects on the field during athletic contests, such as dimming some of the lights to create “tunnel” lighting that will focus on teams as they enter the field.

Updating the stadium lighting is part of the $3.2 million energy performance contract (EPC) that is included in the overall $45.2 million capital project. Energy performance contracting is a financing technique that uses cost savings from reduced energy consumption to repay the cost of installing energy conservation measures, according to the U.S. Department of Housing and Urban Development (HUD).

This allows building users to achieve energy savings without up-front capital expenses because the energy improvement costs are borne by the contractor and paid back out of the energy savings, according to HUD.

The district entered into its current EPC with Siemens, an energy service company, to upgrade failing or inefficient infrastructure across the district, including replacing boilers, installing energy efficient lighting throughout the district and adding and replacing building insulation.

The board originally planned to move forward with board authorization only for the EPC. However, by bundling the EPC with the proposed facilities project and having voters authorize the work, the district and its taxpayers will receive the same amount of building aid, 75.3 percent, on the energy related-project work as it will on other eligible projects in the plan. If only the board had authorized the work, the district would only receive 65.3 percent of aid on the energy-related projects.

In addition, incorporating the EPC into the facilities project proposal enables the district to use bond financing instead of lease financing, which will further reduce taxpayer cost because there is a competitive bid process for the interest rate. Overall, by bundling the energy savings work within the capital project proposal, the district estimated a savings of about $873,000 that will result from higher building aid and lower financing costs.

The district is nearing completion of the first phase of the capital project, which includes an approximate 4,000-square-foot addition to Enders Road and a renovation and expansion of F-M High School’s library media center. Enders Road students and staff began using the spaces within the addition Sept. 23, and the library media center is expected to be complete this fall.

Final design and construction plans for Wellwood Middle School have been submitted to the New York State Education Department for review and approval. Construction there, which will include a 15,000-square-foot addition and new main entrance facing Fayetteville Elementary School, creation of a new, enlarged parking lot in front of the addition, and renovations to existing classrooms, including asbestos abatement and infrastructure upgrades; is expected to begin in spring 2020.