Meet the Bluebee Pals: Soft, fuzzy and huggable, these stuffed animals are helping Fayetteville-Manlius elementary students with autism engage and focus while in the classroom.

Through an existing partnership with researchers from Boston Children’s Hospital, the Fayetteville-Manlius School District was asked to collaborate on a study to determine if students diagnosed with autism are more focused and attentive following directions from an adult or a Bluebee Pal.

In June 2018, the district received a donation of 10 Bluebee Pals from Laura Jiencke, CEO and founder of Kayle Concepts, through the company’s Bluebee Pals Project, a nonprofit organization that donates the cuddly characters to be used as an assistive technology tool to enhance speech therapy and special education instruction.

The 13-inch tall stuffed animals equipped with state-of-the-art technology connect with apps through smart phones, tablets, laptops or any Bluetooth-enabled device. Their mouths and heads move while they read stories and sing songs, engaging young students and assisting teachers with instruction.

“Who doesn’t love a stuffed animal that is soft and cuddly?” said Lisa Miori-Dinneen, F-M’s assistant superintendent for special services. “I think it’s innovative to pair it with technology to engage and motivate children’s learning while providing comfort at the same time.”

The district’s speech and special education teachers in each of the district’s three elementary schools are informally using the Bluebees. So far, the Bluebees have proven to be a motivating tool, Mrs. Lisa Miori-Dinneen said.

Children with autism typically lack eye contact and engagement, but videos of the F-M students using the Bluebees show them intently watching the Bluebees’ mouths move, holding them closely to their ears to listen to them talk and following the directives the Bluebees give, such as touching a specific image on an iPad screen.

Recently at Mott Road Elementary School, speech-language pathologist Jacqueline Cullen used an iPad microphone app and a Bluebee to relay a set of directions to a student. The student watched and listened to the Bluebee, then immediately followed the directions to stand up and clap three times. The Bluebee also read an e-book displayed on the iPad and asked the students questions about the pictures on the screen.

“Since the inception of the Bluebee Pals Project in 2015, Bluebee Pals have become an effective assistive technology tool for therapists and educators in obtaining language and educational goals with children with autism,” Jiencke said. “We are thrilled the Fayetteville-Manlius School District has utilized Bluebee Pals in its classrooms and the positive impact they provide as a creative learning tool in achieving communication and educational objectives.”

The Bluebees project is in addition to two other research projects the district is participating in with Dr. Howard Shane, a Harvard Medical School associate professor and director of the Center of Communication Enhancement at Boston’s Children’s Hospital.

Visual Immersion System (VIS) is a communication method that uses visual supports—such as videos, pictures, and iPads—to enhance and expand the language and communication skills of students diagnosed with autism. Just in Time (JIT) instruction focuses on the effects of language and behavior of children with autism when directives are delivered through wearable technology, such as an Apple watch.

F-M is the first and only school district that Dr. Shane and his colleagues have worked with. 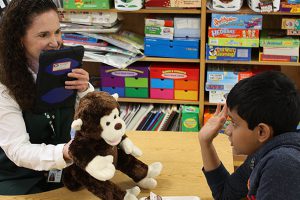