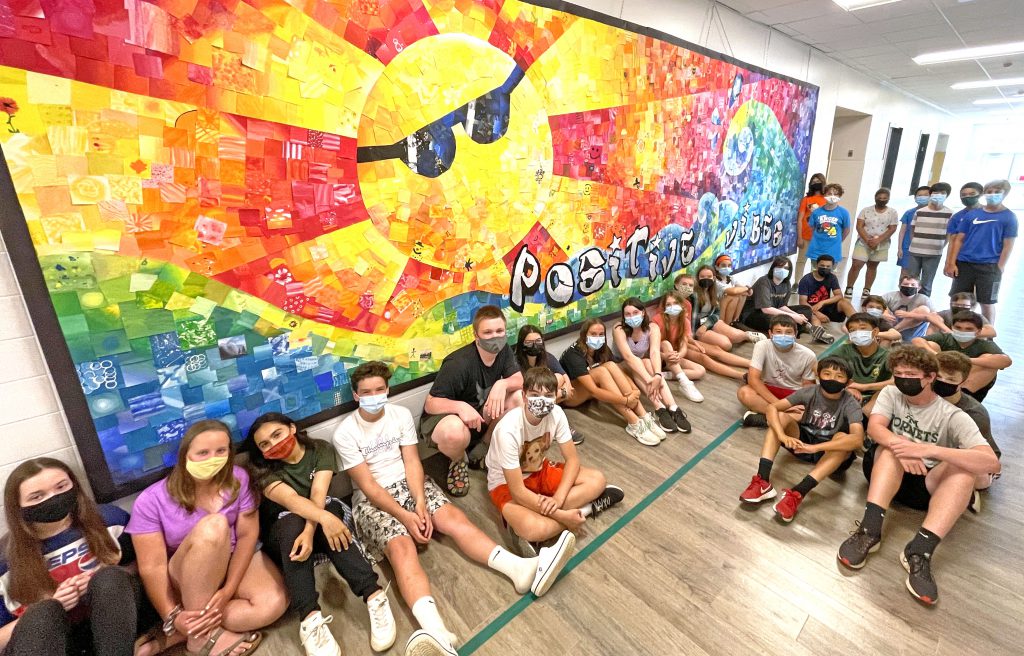 Wellwood Middle School students took on a schoolwide collaborative art project to create a hallway mural made up of more than 3,000 miniature paintings.

More than 350 students from all grade levels participated in the project, including developing the design, choosing the font and color scheme and assembling the individual pieces in the hallway. The project aligns with the district’s strategic plan, which highlights teaching and learning as one of its priority areas. A goal in that area is for teachers to offer learning opportunities that promote student engagement and to allow for student voice and choice, such as this project did.

“We are hoping students realize the power of collaboration and the positive impact art can have on a community when so many are involved in an experience like this,” said art teacher Mary DeBlois, who worked on the project with her colleague Katie Krestchmer. “It brought out many smiles, during the artmaking process as students were experimenting and discovering what they can do with paint and also from students and staff stopping to look at the final piece in amazement and sharing compliments.”

The end result was an 8-foot tall by 24-foot long colorful creation that features the sun and beach waves and the words “positive vibes.” The inspiration for the project came from the CBS Sunday Morning show. On Wednesdays, when classes were remote, grade 7 and 8 students watched show segments that featured artists and various kinds of artmaking.

“Whether it be art made of jelly beans, dryer lint, on pavement or in potholes, each segment was so interesting and inspiring,” DeBlois said. “We were particularly inspired by the use of unconventional materials and the specific story featuring the Philadelphia Mural Arts Program.”

Sketches and initial ideas for Wellwood’s project began May 24, and the mural was officially finished June 18. It is currently hanging in the hallway outside of the school’s new art rooms.

The individual squares are mostly 3-by-3 inch or 4-by-4 inch. When creating their individual pieces, some classes were given such tasks as using particular colors, such as yellow, yellow-orange and yellow-green, while other classes were told to focus more on a particular technique, such as blending from one color to another to create a gradient or using dry brush, sgraffito or splatter techniques.

“We are already thinking about doing something bigger and even more impressive next year,” DeBlois said. “It was such a great way to end the year.”